Educators working to expand Arabic as a language offering to North Carolina students gathered recently at UNC-Chapel Hill to explore diversity, equity, inclusion and accessibility in the language and cultures classroom. 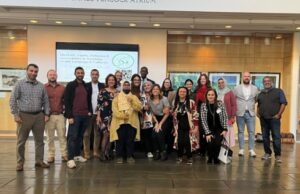 “The world of Arabic teachers, Arabic speakers and students of Arabic is incredibly diverse, and our curricula is sorely lacking when it comes to that reality,” said Caroline Sibley, conference organizer and assistant teaching professor of Arabic at UNC-Chapel Hill.

“Teachers face the incredible challenge of adequately reflecting that diversity and being inclusive of less mainstream dialects. If students cannot find themselves, or be seen, in the classroom, they face barriers to access and inclusion,” Sibley added. “That is the last thing any teacher wants in their classroom.”

Dr. Bentley Brown, a filmmaker and professor of critical media practices, set the tone for the conference with opening remarks that encouraged attendees to consider the vast diversity of the Arabic-speaking world and how teachers reflect it in the classroom.

“Conferences like this FIKRA are important because they provide a space for people with very specific interests to interact in a way that is meaningful and transformative,” said Brown, who moved as a child with his family from the United States to Chad, where he learned Arabic and began making films. Prior to starting his doctoral studies, Brown taught in a filmmaking program in Jeddah, Saudi Arabia.

“The focus on Arabic dialects in particular evoked a conversation that was provocative and relevant in a changing pedagogical landscape. I hope participants were able to leave with a newfound respect for spoken dialects, as well as a drive to fight the “Fusha monolith” and the idea that some varieties of Arabic are better or more important than others. As language evolves and changes, so must we,” Brown concluded.

Emma Trentman, an associate professor of Arabic at the University of New Mexico who is renowned in the Arabic-linguistics community for her research on multilingualism and trans-languaging, engaged attendees in a virtual keynote presentation focused on the languages of instruction and learning that make Arabic language acquisition more accessible for students.

In concurrent sessions on Oct. 21, educators discussed ways to expand the DEIA scope of their instruction from curricula to classroom teaching practices. Sessions presented by faculty at institutions across North Carolina featured topics such as “Representing Western Arabic Language and Culture in the Classroom,” “Exploring Inclusive Teaching Methodologies: Lessons from Yallah al-Quds,” “Critical Intercultural Communicative Arabic: A Call for a Paradigm Shift in 21st Century TAFL,” and a panel with the authors of “Jusuur, a groundbreaking program for beginning Arabic.” Attendees were able to select sessions that best aligned with the grade levels they teach (either a K-12 or a higher education focus). The schedule also included time for facilitated discussion among attendees in small groups to share teaching resources, ideas and challenges. 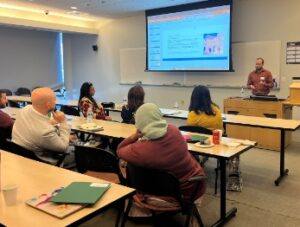 Oct. 22 sessions were dedicated to discussions about potential programs for involvement: Qatar Debates, an international debate competition in Arabic held on the high school and university levels; and Arabic as an offering on the UNC Online Course Exchange, which would grant students across the state access to quality virtual Arabic language instruction.

Noor Ghazi, an Arabic professor at UNCG and Durham Technical Community College, was among the participants at this year’s conference.

“I have learned that coming together with other Arabic educators can add a lot to our knowledge by sharing different resources and teaching methods,” Ghazi noted. “The highlight for me was seeing the tremendous efforts of all educators to make a difference and be as creative as possible in delivering the beauty of Arabic and its cultures, from music to films, documentaries, media and more.”

Concurrent session presenter, Awad Awad, high school Arabic teacher and representative of the Arabic Teacher Council of the South, remarqued “the vision, synergy, avante-garde work, and potential of the NCATC is a K-20 pipeline model worthy of emulation.” He concluded that “the FIKRA conference ought to take its show on the road for it pushes TAFL from its artificial classroom realm into intercultural, multi-dialect, and multilingual reality framed in an inclusive, diverse, equitable, and accessible world we all wish to live in.” 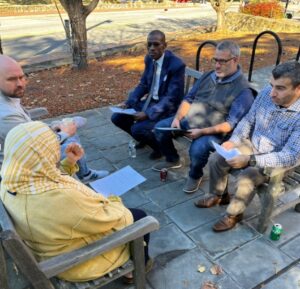 As Arabic is a less-commonly taught language, teachers face unique challenges and are typically under-represented at world language conferences. In response to this, a handful of regional Arabic Teacher Councils have emerged across the country in recent years. Supported by the N.C. Consortium for Middle East Studies, the NCATC is the first group in North Carolina to specifically serve the needs of Arabic teachers.

A primary goal of the second annual convening of NCATC was to delve more deeply into the DEIA challenges facing Arabic teachers in the classroom.

“Next steps include becoming an allied association of FLANC (Foreign Languages Across North Carolina), building Arabic teacher presence through presentations and participation at its bi-annual conferences,” Sibley said.

“This past year alone, four new Arabic language programs emerged in our state, one at an HBCU, two at Montessori elementary schools and one at the North Carolina School of Science and Math in Morganton,” she said. “The community of both Arabic language teachers and students learning Arabic continues to grow, and NCATC wants to be an integral part of supporting them.”