Book Talk: “Under Jerusalem: The Buried History of the World’s Most Contested City” 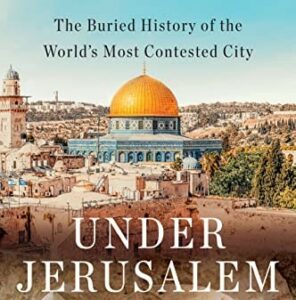 Book Talk: “Under Jerusalem: The Buried History of the World’s Most Contested City”Tuesday, December 12 | 7:00-8:00 PMBeth El Synagogue, Durham, or online – Register hereAll are welcome to come hear prolific author and journalist Andrew Lawler speak about his new book. Jerusalem is a city of endless beauty and fascination for residents, visitors, and historians. It is also a political tinderbox with conflicting ethnic, religious, and societal claims to its many glories. Archaeology has been a focal point of Jerusalem study as layer after layer of its history is revealed, adding fact, nuance, detail, and drama to its story. Those who study Jerusalem and its unique history, which ranges from pre-Biblical times until the present day, are at the heart of a tempest of claims, counterclaims, and contentious political theater that seems never to wane. Under Jerusalem by Andrew Lawler is an intriguing resource for those interested in learning what lies beneath the modern city and how those findings affect today’s political and social landscape.Andrew Lawler is author and journalist whose work has appeared in The New York Times, Wash­ing­ton Post, Nation­al Geo­graph­ic, Smith­son­ian, and the academic journals Sci­ence and Archae­ol­o­gy.